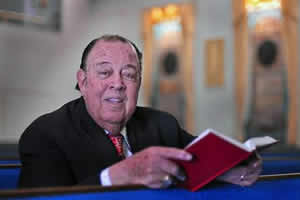 Dr. James William Sanders, Sr. was the first recipient of the Hall of Fame Award of the Cherokee County Branch of the NAACP, was named to the state Black Hall of Fame in 2005 and was awarded the state's highest civilian honor, the Order of the Palmetto.

He was the former member of the Trustee Board of Morris College, Sumter, South Carolina and most recently served as Vice-Chairman of the Trustee board of SC State University in Orangeburg, SC. He served as President of the of the Cherokee County Black Ministerial Alliance, also as the former Chairman of the South Carolina Appalachian Council of Governments which serves six SC counties: Past Steering Committee Member of Lt. Governor Mike Daniels, and a former member of the City of Gaffney Multiplex Steering Committee.

As an educator, he was the former Vice-Principal of Sims High School in Union, SC. His last appointment was by Governor Mark Sanford to the Board of Directors to the South Carolina Public Service Authority.

He was the beloved Pastor of Bethel Baptist Church in Gaffney, SC for sixty one years and the Pastor of Island Creek Baptist Church for thirty-eight years. Among his awards and honors he has been listed in Who's Who Among Black Leaders of the South-1975, Who's Who in America Among Black Leaders-1984, Who’s Who in America Among Top Executives-1998, Omega Psi Phi Citizen of the Year, First Recipient of the Hall of Fame Award of the Cherokee County Branch of the NAACP-1996. He was presented by the Governor of the State of South Carolina the Order of the Palmetto Gentleman Award. (This is the highest award that can be given to a citizen of the State). He has also received awards from the Mayor of Gaffney and Blacksburg, the State Representative of South Carolina, and the State Senate of South Carolina. He is fraternally associated with Omega Psi Phi Fraternity Incorporated, a Mason and a Shriner.

He mentored many young men and women to achieve their dreams including US Democratic Congressman, James Clyburn and (RET) Major General Matthew Zimmerman, the First African American Chief of Chaplains of the US Army.